Read about our performances at recent events below...
Gloucestershire Action for Refugees and Asylum Seekers;
Joint Concert with the Wide Valley Singers - July 2nd 2022
​​the church, and she told me they were to represent doves of peace. I hope we brought a bit more of that universal peace to our audience last night. And (though I don’t know the amount yet) I hope we helped raise some urgent funds for the Gloucestershire Action for Refugees and Asylum Seekers fund. That has got to be special!
"Beer Festival", The Pelican Inn, Gloucester.
Friday; June 10th; Start 16:30  - FREE EVENT
Churchdown Parish Queens Platinum Jubilee Celebration
and Beacon Lighting at Churchdown Park
an interest in joining the choir - result! Unfortunately, the beacon lighting was not so successful. After a few  attempts, the gas fired beacon sprang into life, but then went out after a few minutes, not to return. ​
Churchdown MVC in Concert in Aid of Guide Dogs
A SONG FOR A DOG
​by Rev. Barry Taylor. 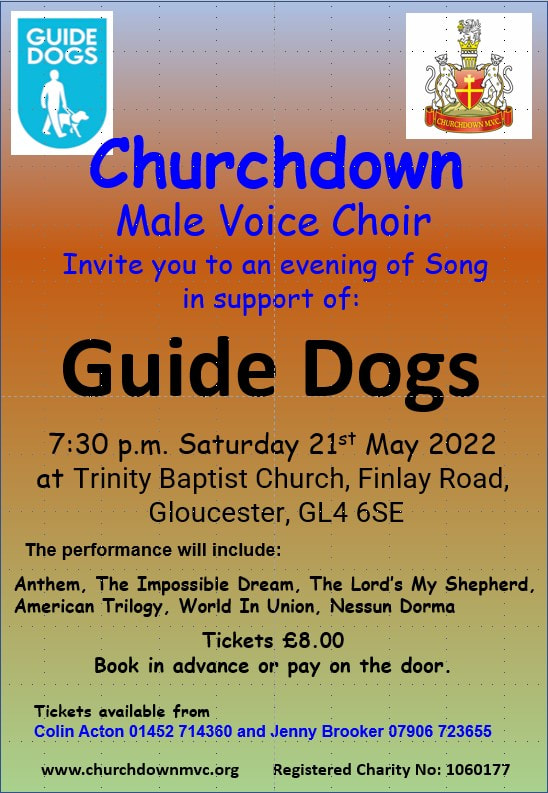 ​
Tonight saw yet another superlative concert by the Churchdown Male Voice choir, this time to an audience of about 100 people at the Finlay Road Baptist church in Gloucester.
Three things particularly struck me within the first five minutes: the lady in floods of tears on the back row during “Bridge over troubled water” (she must have had history with this song – I hope it is nice history); the way some people joined in, some with eyes closed, reflecting maybe on the beauty of the music or the meaning behind the lyrics; and the calmness and placidity (if that isn’t a real word it should be) of the guide dogs in the audience. Most were guide dogs in training, and that is really what tonight was all about – supporting a fantastic charity that gives people freedom to move; freedom to live.
Once again it was a fairly broad repertoire, from reflective pieces like “Amazing Grace” and “The Lord’s my Shepherd” through heart-throbbers like “The Impossible Dream” and “Can you feel the love tonight” to rousing numbers like “World in Union” and of course “Nessun Dorma”.  We also threw in some wonderful soloes, with “Annie’s Song” being one highlight of many. And yet again we had a standing ovation by the end. Only one bloke seemed to fall asleep, but “Nessun Dorma” certainly woke him up!
The evening concluded with a moving talk by a guide dog owner, about how crucial they are to a life beyond the front door of the house (and his jokes were almost as good as our own compere’s). He brought it home to us about why we are supporting this charity, at the same time as we are enjoying ourselves engaging in our passion for singing. That’s got to be a real win/win.
Net amount raised for Guide Dogs £959
A SCANNER FOR A SONG
​by Rev. Barry Taylor.

Churchdown MVC in Concert for Alzheimer's Society
at St. Barnabas Church, Gloucester.
SINGING AT SHRINE TO CYPRUS SAINT
by John Basford
However, some of us unfortunately suffered a loss of memory, but not due to Alzheimer’s, during ‘The Prayer’, in particular the Italian sections!  Hopefully we were forgiven as we retrieved the situation with a sterling performance of ‘Mansions of the Lord’ and then ‘American Trilogy’, which probably roused the whole of Tuffley.
After the interval the choir gave confident renditions of ‘The Lord’s my Shepherd’, ‘Bridge over Troubled Water’, ‘Working Man’ and ‘World in Union’ – the last two pieces including stunning solos from Mike Vickers and Jeff Bourton.
Ralph then turned to face the audience, and demonstrated how it should be done, by treating us to the second solo performance of the night. His delivery of Javert’s song ‘Stars’ from Les Miserables was worthy of the London stage.
The choir concluded the evening with ‘Unchained Melody’, ‘And So it Goes’, ‘Amen’ and ‘Nessun Dorma’, as well as rousing encore of ‘You’ll Never Walk Alone’ which possibly inspired Liverpool FC to beat Manchester United 5-0 at Old Trafford that same weekend. Who knows!
The meaning of the French word encore is ‘additional performance of an item at the end of a concert’. However, on this occasion we had an encore to the encore, an organ recital by James, which it has to be said was ‘different’.
We were delighted to hear a lot of money had been raised for an able and worthy cause. Over £600 came from ticket and programme sales, with the retiring collection still to be counted. Moreover, it was a very enjoyable evening, as comments from our audience members confirmed.
Churchdown, Hereford Police and Worcester MVCs
at Tewkesbury Abbey.
When the joint pieces, such as ‘American Trilogy’ and ‘World In Union’ were sung with the other two choirs some were accompanied by the beautiful Curzon Brass Quintet, which so enhanced the songs it lifted the hair on the back of your neck. These talented young professionals also treated our audience to a set of six numbers in the first half, including Stevie Wonder’s ‘Isn’t She Lovely’, and an arrangement of the Elvis number, ‘Can’t Help Falling In Love’.
The evening ended with an encore of ‘When The Saints Go Marching In’ and nobody wanted it to finish, but with choirs it doesn’t because they met up later in the Tewkesbury YMCA and sang their hearts out until the venue closed. That’s what it’s all about, ’having fun’ and helping fund good causes. The final figure raised for the Midlands Air Ambulance is not yet known, but we can be proud of our ticket sales, amounting to £1,186.

Quotable, but possibly biased, quotes:
MD Ralph Barnes: “You were brilliant! It is great we are back in action”
Accompanist James Quinn’s Mum: “You were the best choir, particularly your diction and dynamics.”
Alex Chalke MP: “I was sorry I had to leave at half time, but I heard the rest of the concert was very good.”
Worcester Male Voice Choir Member: “You open your mouths wider than most.”
Male audience member: “Your ‘Lost Chord’ was the highlight of the evening for me.”
Full Concert Programme

Download File
A joint concert with Dursley MVC
St Stephen's Church, Tivoli, Cheltenham
​arranged for them by Musical Director, Barrie Cooper. On piano was their other MD, Matthew Sharp. Both are well known in the area for their musical activities with schools, choral groups and churches.
We followed with a group of five numbers under the baton of our MD, Ralph Barnes, starting with ‘Anthem’ from Chess, and building to a climax before the interval with ‘World In Union’, featuring a solo from Jeff Bourton.
At this point refreshments were available, with cash donations requested towards church funds, the whole evening being devoted to raising money to help preserve the splendid building that was acting as our theatre for the night.
After the break we completed our second set with Mike Vickers taking the solo line in ‘Working Man’ by Rita MacNeil, and ending with Puccini’s ‘Nessun Dorma’ from Turandot. On heading back to the choir stalls we changed places with our Dursley friends, who gave us another lovely quartet of songs, including a refreshing Barrie Cooper arrangement of ‘Over The Rainbow’.
Finally the two choirs got together in something resembling a ‘flash mob’ to perform ‘When The Saints’, ‘Speed Your Journey’ and ‘American Trilogy’. We should have segued neatly into a grand finale with ‘Morte Criste’, accompanied by James Quinn on the organ. However, it was at this point the gremlins struck. It was not just a case of the lost chord, which Sir Arthur Sullivan might have appreciated. James was actually missing every note he was hoping to play. As he left his seat and disappeared into the mix of pipes above him, a patient audience, a frustrated MD and a nervous compère all waited. After what seemed an age he emerged, adjusted his mirror, that seemed to have fallen off in sympathy, and we finished our advertised programme.
As an encore we delivered ‘Gwahoddiad’ in Welsh, before heading for an afterglow at the Tivoli a few streets away. At this popular watering hole an impromptu performance seemed to impress the locals, and rounded off a very satisfying evening.
2020 - As a Result of Covid 19, no concerts we performed during 2020 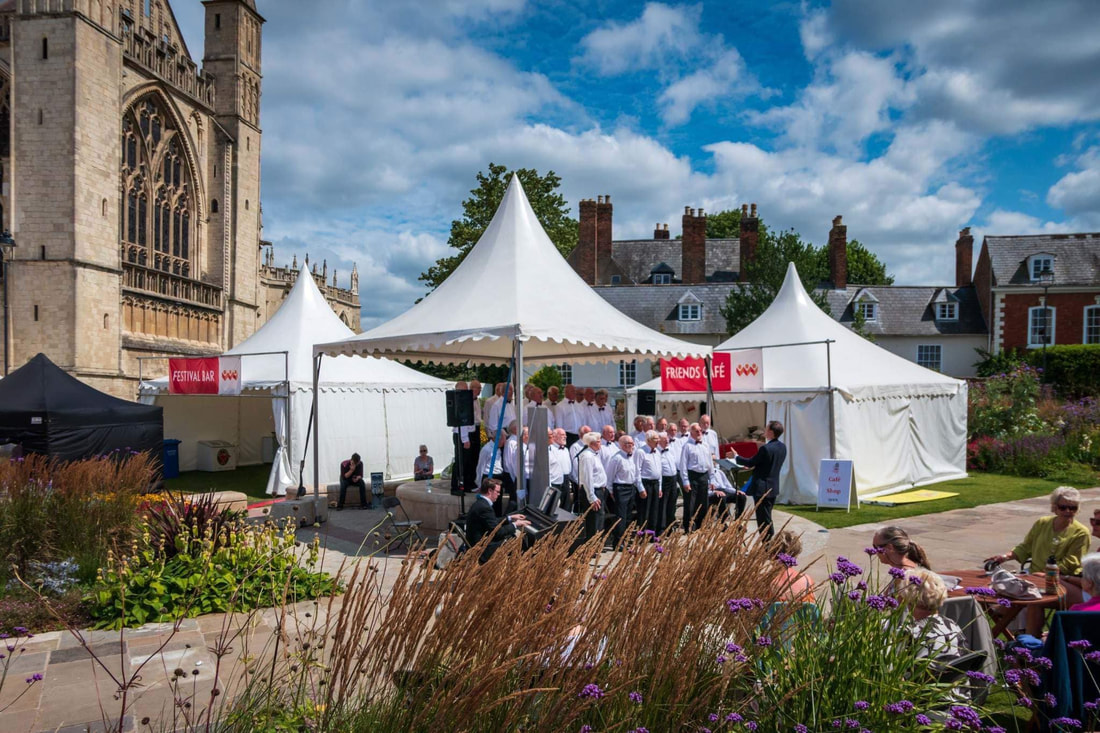